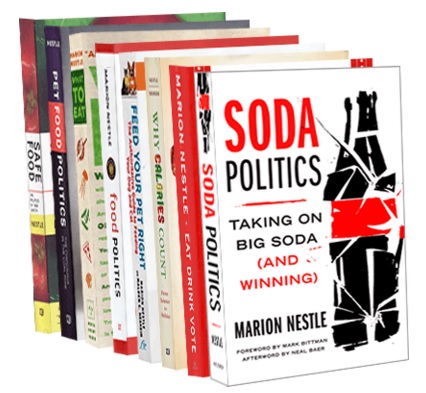 Soda Politics by Dr. Marion Nestle (Oxford University Press, 2015) is a large book written from a North American perspective but well worth a read as the argument for a sugar tax intensifies with the backing of the Commons’ Health Committee today.

As a British advocate, there are some fascinating historical insights on Coca-Cola and PepsiCo, the giants in the field. But there is also so much which is familiar as the ‘Soda’ industry does its best to counter the possibility of a sugar tax, supports front ‘pro sugar’ groups, funds research to obfuscate public health messages whilst doing its best to discredit campaigns like Give Up Loving Pop (GULP).

Marion Nestle describes the strong evidence between sugary drink consumption and obesity, type 2 diabetes and dental decay. She details the profits made from products which are 90% water and the environmental impact of their production. There is a lot of well-researched information on how the sugary drinks industry works and how it markets its products and it certainly starts early. A former Coca-Cola executive is quoted saying “90 percent of all soft drink marketing is targeted at 12 to 24 year olds”. And in every chapter there are tips for effective advocacy.

As the health lobby’s messages that sugary drinks contain only empty calories with no nutritional benefit start to become resonant with the public and the media, so ‘astroturf’ (artificially green and grassroots) front groups are becoming more common. These groups (and sometimes individuals) try to discredit critics through ridicule and terms such as ‘food police’ and ‘nannies’. Pretty familiar stuff to those of us who use social media. And, for the American Beverage Association’s actions which Marion Nestle describes, you have the Food and Drink Federation and British Soft Drinks Association in the UK who tried to stop Food Active publishing its eye-catching GULP images earlier this year. A shopping centre in the North West of England also refused our GULP roadshow booking because of its commercial relationship with Coca-Cola. The book lists many American equivalents.

I enjoyed the practical sections on advocacy in New York City, California and elsewhere. The description of a tax on ‘sodas’ and junk foods which has been successfully implemented in Mexico is particularly encouraging. British advocates of a sugar tax are rehearsing their arguments as I write. Marion Nestle advocates that such arguments gain more traction is revenues are used to fund public health programmes as in Mexico and as suggested by Jamie Oliver and Sustain’s Children’s Health Fund in the UK.

This is a food advocates’ book which forensically analyses the tactics of the ‘Soda’ industry. As Dr Margaret Chan of the World Health Organisation says, it ‘will open the eyes of the public and parliamentarians to the health hazards of what is essentially liquid candy in a bottle.’